A history of Eastport continues and explores the connection that Maryland’s 9th Governor and First Lady had to Eastport.

In the early days of the colony near Annapolis, the Quaker Hill family had a plantation at "Hills Point" outside Annapolis.  Henry Hill, the family patriarch, was a merchant and owner of four ships.   Dr. Richard Hill, surgeon and botanist was born on the site in 1698. His brother, Joseph Hill, was born there in 1705. Joseph seemed to have worked with his father importing wine and rum and sugar. Joseph acquired a great deal of land near Annapolis and in Baltimore County. When he died in 1761, his two children deceased; he left the bulk of his property, including Horn’s Neck (Eastport) to his granddaughter, Henrietta Margaret Hill.  Henrietta, born in 1751, was 10 years old at the time.

The peninsula generally housed livestock for families in the town and does not seem to have been planted in tobacco. Citizens of Annapolis town at some point petitioned Joseph to cease and desist his raucous behavior.  He reportedly rowed across Spa Creek to Horn Point where he would race his horses and shoot his guns. Some may say that as early as 250 years ago the differentiation between the proper gentry (Ward 1) and the more plebeian laid back personality of Eastporters was established. 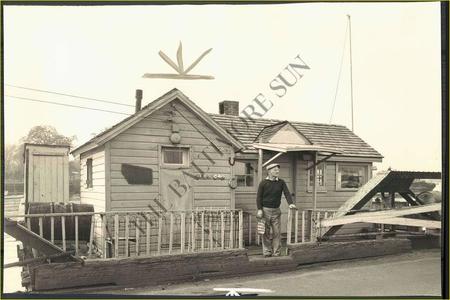 SToriEs, Character, and History of Eastport

Eastport has a rich history and the ECA wants to preserve and share it. For our first story, Eastport neighbor Denise Robinson researched the life of  William Branzell, Eastport's bridgetender for 27 years.

William was born March 9, 1860, just outside of Annapolis. He was the fifth of eight children born to George and Rachel (Margaret) Branzell.  His father was a huckster, a term used then for people we call salesmen.

William’s father saved enough money to purchase three lots on the bank of Back Creek, a place where his family could live and grow.  George and his boys built a two-story farmhouse in 1871.  Once completed, they began work on a second dwelling. ​​