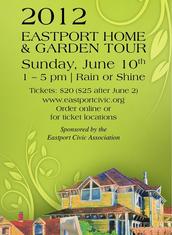 The tour started at the Annapolis Maritime Museum.  The homes represented an eclectic mix of homes in the Back Creek section of the Eastport Peninsula.  Visitors toured traditional waterman cottages transformed for today's living to modern Victorian Homes and Lisa
Masson's photography studio/gallery.  We raised over $11,000 to support the worthy causes of the Eastport Civic Association.
​
​
2012 -Sunday, june 10

as the "best kept secret in Annapolis."  Several homes have been nationally featured on HGTV and in Southern Living,

delightful gardens.  They meandered through several homes and gardens in the Quarter Landing enclave, visited the

This tour included ten homes and gardens at the Horn Point end of the Eastport peninsula, an area surrounded on three sides of water.  .

This tour showcased twelve homes at the end of the peninsula on the side of Spa Creek.  It included homes and gardens
on First Street (from Severn to Chester), end of Severn Avenue and Jeremy's Way.

This tour featured homes and Gardens on Second & third Streets between Severn & Chesapeake, and Severn Avenue.

This tour highlighted homes and gardens on Washington Street, Kelly and Washington Courts,

This was the first year of the Home & Garden Tour.  The varied homes and gardens were on Sixth

Street between Chesapeake and Chester, Burnside Street (between Creek View and Chesapeake), and Chester Avenue (from Sixth to the end).